The Engine Room Gallery is delighted to host an exhibition of new work by Mary Martin, inspired by her travels to the Algarve in Southern Portugal. 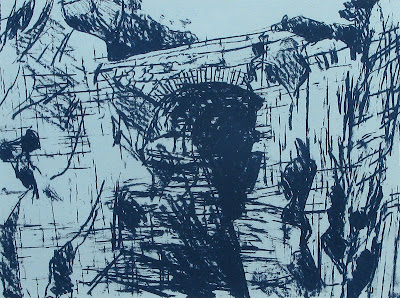 "The strangeness of this beautiful shore was both familiar and foreign to me. Walking along the rocky cliff tops reminded me of scrambling across the hills of south Armagh as a child. The pounding ocean has carved its mark into the towering sandstone cliffs creating holes and cavities in weak spots. I am interested in the ambiguous nature of holes. They can be somewhere to hide – a place of refuge or they can represent the void, the abyss [black holes]. They occur regularly on the rock-face and in the shadow of bridges. The shore is an interface that shifts as land and sea resist each other." 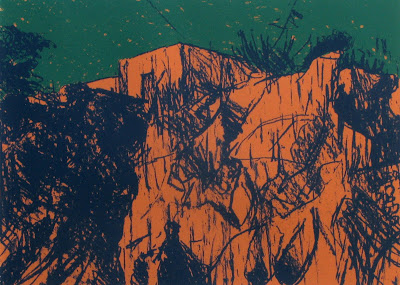 "The work developed from drawing the lines that scored and shaped the vertical face of the soaring cliffs and rock stacks that stand like the walls of a fortress above the restless water. The formation of cracks and crevasses in the rock modulates on a different timescale to the powerful ocean with its rhythmic tides and lashing waves. The splendour of the cliffs reminded me of a few lines from Colm Toibin’s book The Master, ‘It was easier to be old here, [he thought]; no colour was simple, nothing was fresh, even the sunlight itself seemed to fall and linger in ways which had been honoured by time.’ The alterations in colours reflect the mood of the hour, the seasons, the time of the day in this elemental landscape."

The exhibition continues until Saturday 31 August 2013.
Posted by The Engine Room Gallery at 2:26 AM No comments: